The Athlete of the Month (AOTM) Committee for CMA has selected the AOTM designation to two CMA athletes for October. Congratulations to Brian Murphy and Maria Zambrano for their phenomenal performances!

Brian Murphy, aged 60, won the M60-64 division of the London Marathon on October 2 in 2:44:20, which was about 5 minutes faster than his nearest competitor. Brian’s time also eclipses the current Canadian record, which he set earlier this year. Brian hails from London, Ontario and is coached by Reid
Coolsaet.

Maria Zambrano, aged 52, started with the elite group in the Toronto Waterfront marathon on October 16 and finished in 12 th position overall for women. Her time of 2:46:14 was faster than her current Canadian W50-54 record. Maria resides in Calgary and is coached by Alex Ulaszonek.

Mélanie Guy, age 44, proved what an all-round thrower she is by exceeding the Canadian record in the W40-44 Throws Pentathlon on October 15 in Longueuil, QC, by over 230 points with a point total of 3702. This performance ranked her third in World Rankings. Mélanie also broke the W40-44 Discus record with a throw of 39.85m. Mélanie hails from Belœil, QC, and is coached by David Delombaerde.

Roslyn Smith, age 74, placed third in her W70-74 age division in the London Marathon on October 2 in a time of 3:50:46, which is faster than the current Canadian record. Roslyn lives in Comox, BC, and is coached by Wayne Crowe. 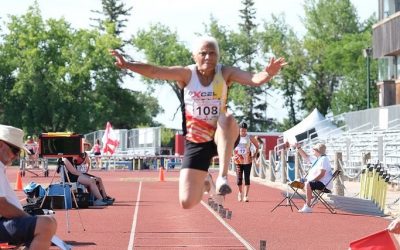 . The Canadian Masters Athletics Athlete of the Month for July is Carol LaFayette-Boyd, who broke...