The Canadian Masters Championships were held on July 16-18 at the Toronto Track & Field Center.
Great turnout – Great weather – Great Banquet (thanks to Lynn Bourque). Results and over 1100 photos are posted.

Check out this NEWS page…..highlighting 25 Canadian Records and almost 30 Meet Records !!
CAN Records

M45 Mike Sherar broke the CAN 800m record July 20th at Varsity Center – the home of next year’s Championships.

Mike is one of the UTTC Masters Coaches, as well as the Canadian Masters Communications Director. Getting FASTER as he ages !!!

W70 Christa Bortignon broke her own CAN Triple Jump record with a 7.17m at the Trevor Craven Memorial in BC two weeks ago. Ontario Masters Hall of Fame member Brian Oxley sends this shot of Keith Kerr, one of the first OMA Presidents. Brian does his sculling from the dock…to the inspiring pipes !

In it for the Long Run

In 1980 I turned 40 years of age and so became a “Master” athlete. To compete in age group races holds
no attraction for some of my former rivals. Why I race and they do not depends on why they raced in the first
place. I run because I like it and I find training and racing infinitely variable and
interesting. However to get satisfaction from it I do not have to win. My critics would
point to my six times second place finish at the Round the Bay Race, Hamilton as
evidence of this “loser attitude”.
For me the most important part of running and racing are the memories that they cause.
I have had some astonishing even bizarre experiences and one day will write some of
them down. But, for now, I recall the sheer joy of running flat out the last leg of an
Ontario Masters team in the Jaspar to Banff relay in 1989. There were no competitors in
sight ahead or behind, no spectators, race officials or even passers by. I was on a little
used road by the Vermillion Lakes as the sun came up over the Rockies. It was a glorious
experience – beyond price – may you all have such moments.
As a Master I have raced in World Championships in Brugges (Belgium), Brisbane
(Australia), Melbourne (Australia), Newcastle (England), Turku (Finland) and at the foot
of Mount Fuiji in Japan. Each event introduced me to a part of the world that I had not
known before and made me new friends. Why should I stop now?

Speaking of the World’s in Sacramento next year….

The loudmouth OMA President (L) was spouting off about how the Ontario athletes were going to kick Alberta’s %$# at last winter’s Indoor World Championships in Kamloops. A small wager was placed between said Loudmouth and the Alberta Masters Pres Donna Dixon (R). As previously reported, the Westerners cleaned our clocks!! As loser of the bet, the Vegan was forced to wear an “I Love Alberta Beef” T shirt during Sunday’s meet!

The bet is on for Sacramento. Now come on people… we have to rally all our members or we face disgrace and humiliation at the hands of these Western Cowboys and Cowgirls yet again…and your President will be forced to….( I can’t even speak the words. It’s got something to do with HAIR! ) 🙂

Greetings from the West the day after the New Balance Series #2 Meet held at Glenmore Track in Calgary. This series of three meets is organized by the Calgary Track Council and sponsors are New Balance and Gord’s Running Store.
Results of meet are at the following – http://www.calgarytrackcouncil.com/2010/Outdoor/ResultsNB2.htm

Weather was cool (approx +6) and very blustery (sort of stood the guys right up on the first turn but seemed to come in from several other directions too). Last-minute shuffle with Renwick moving up to M65 when Dargie couldn’t run due to injury in Masters Mile run earlier in evening. Note that Renwick ran the Masters Mile also. Roy Thomson, who had already done the Javelin, was pressed into service in M60 team as a result. Fred Judson also participated in the Javelin and the Shot Put prior to the relay. 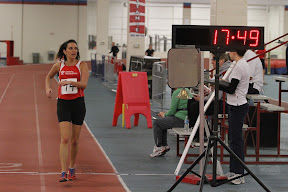 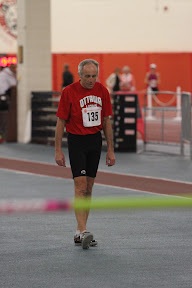 Note – Gerrit and Roy Thomson were originally both “alternates”, and, like Roy Palmer, were very good sports about being “promoted”. 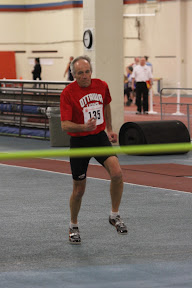 For Kendra and Margot, accomplished road racers, it was one of their first times on the track in decades.

I brought my camera but in the excitement forgot to take a photo of our team. We need Doug Smith in Alberta to document these occasions!

Interesting to see all the T&F and XC events but ultramarathons are my forte. Most of these are not age related so you compete based on how fast (or far) you go in relation to the rest of the runners. I was selected to represent Canada at the recent World 24 Hour Championship. The objective of a fixed time event is to cover the max distance possible in the time. The World 24 Hr Championship that was held in Brive-la-Gaillarde, France on 13/14 May 10.
The event went pretty well. Fortunately the weather was dry as it was raining upon arrival in Paris & the following day before the event in Brive. The conditions for the race were somewhat on the cool side, getting down to what some folks said was 4’C. Even after the sun came up the fog rolled in & there was a damp cold early on Fri AM. However, I managed a PB by about 4 1/2 km. I covered 207.230 km which was first Canadian (of 11). I was 84 of 229 overall at the World Championship and 70 of 151 males. They don’t give stats on age, but I heard one announcement that there was a 26 yr old runner (who I believe was the youngest) so less than half my young age?! 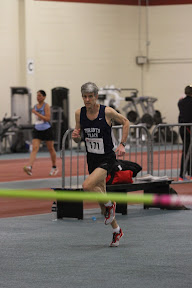 It was a great privilege to represent the Canada during this World Championship. I have been blessed with good health and physical ability. I am very thankful for God’s provision to me as an endurance athlete. Isaiah 40:31 says, “But they that wait upon the LORD shall renew their strength; they shall mount up with wings as eagles; they shall run, and not be weary; and they shall walk, and not faint.” I believe it and I experienced it.

Does the name Murray Halberg ring a bell? Maybe this will jog your memory: Olympic Champion in the 5000 (1960), trained under the legendary Arthur Lydiard, and the first New Zealander to run a mile in under four minutes. I’m told that he was a major inspiration to Bruce Kidd when the latter was a young runner.

Watch this riveting race footage (courtesy of Coach Peter Pimm). If it looks like his left arm was in a sling, it might as well have been. Halberg suffered a serious rugby injury in his youth that rendered his left arm virtually useless.

UTTC hosted an evening with Murray on Wednesday night. I remember Murray Halberg very well. At the 1954 Empire and Commonwealth Games he competed in the 1 mile run. He edged out Rich Ferguson from Canada in the first heat in 4:07.4 (Roger Bannister was third). Both competed in the final (Miracle Mile) where Rich ran the race of his life to place third and Murray finished fifth. Murray went on to compete in the 1956 Olympics where I had the chance to watch him run again, and from then on he became one of the major distance runners of his era. He was an incredible inspiration to all of us. Not only did he have a withered arm but he had one of the least impressive physiques you have ever seen on an athlete. We all figured that if this man could be a world-class runner, there was hope for the rest of us. Murray

Jimson Lee writes…. Check out …. http://www.budwinter.com/audio/ This is an awesome recording of Lydiard, Peter Snell and Murray! A number of us were at last night’s World Premier of Autumn Gold the documentary film at the Hot Docs festival.

The film follows five athletes as they prepare for, and compete at the most recent WMA Championships in Lahti Finland. The Director, Jan (center in black shirt), was present for a Q&A. Jan did a great job of capturing the personalities and motivations of these athletes.

I highly recommend it – two thumbs up! Ebert & Smith

Harold Morioka reports from BC..